Cicadas: The US chef cooking up the insect ‘flavour bombs’ 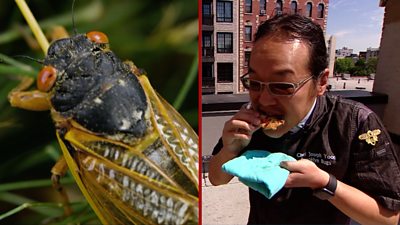 Billions of cicadas – insects that spend almost their entire lifecycle below ground – have emerged in the eastern US after spending 17 years underground. It’s prime time for Brooklyn based chef Joseph Yoon, who specialises in cooking with insects.

“Why aren’t we eating what two billion other people already consume in the world?” he says.

Here’s why the self-described ‘edible insect ambassador’ promotes the use of insect protein in American diets through his group, Brooklyn Bugs.