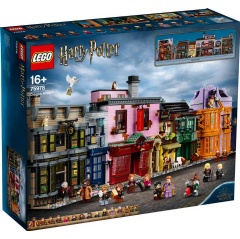 Launching 1st September, the spectacular new LEGO® Harry Potter® set allows fans to be transported to the most magical shopping street in the world, now in brick form! Diagon Alley™ is one of the most iconic locations in the Wizarding World. It’s where Harry Potter gets his first glimpse of the exciting new world he is about to join, as he’s guided through the magical shopping street by Hagrid. And now LEGO and Harry Potter fans alike can build and create the iconic street in their own ho…